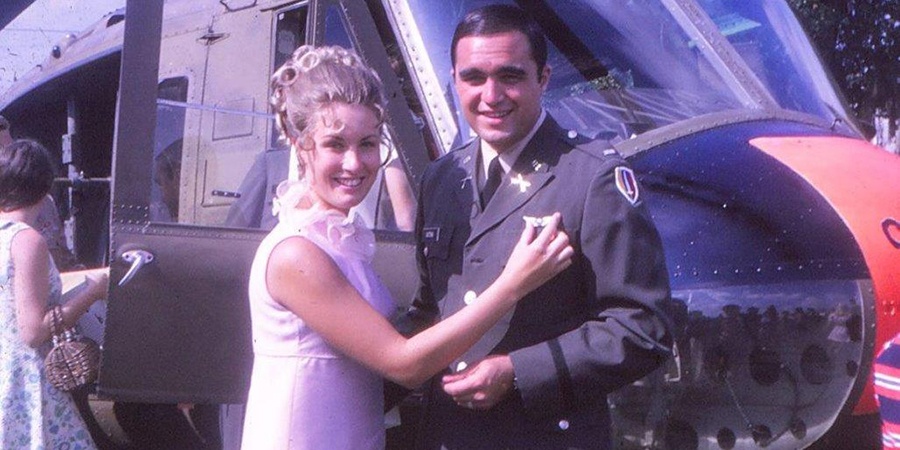 Trip brings back many memories for Treynor couple

Mick and Judy Guttau’s love story spans several decades and includes many significant highlights, but a recent trip to Hawaii to attend the ABA National Conference for Community Bankers brought back many real memories for the couple.

Last month, several board members from TS Bank in Treynor, Iowa, attended the national banking conference, only held in Hawaii every 10-20 years. Among the board members traveling on the trip were Mick and Judy Guttau.

However, this story actually starts in year 1971, the year that Captain Mick Guttau should have died. That February, Mick was on an R&R (rest and recuperation) break from the Vietnam War and met his wife Judy at the Hilton Hawaiian Village for what should have been the last time. You see, for when Mick would return to Vietnam, he would go on one of the deadliest missions of the Vietnam War.

The Unites States and South Vietnam had launched a joint military operation on the NVA (North Vietnamese Army), inside the Laotian border. This was a top-secret mission, known later as Operation Lam Son 719, which was so secret that even Guttau, (then Lieutenant), who would become the lead helicopter over the objective of Tchepone, was not told where he would be returning to when he came back from R&R.

Leaving for R&R, Mick’s concern was reconnecting with his unit when he returned to Vietnam. Even his superiors were not aware of what and where the mission was, so they contacted the brass. All they came back with for Mick was a slip of paper with a phone number on it and told him to call that number when he returned to Tan Son Nhut Air Base at Siagon.

Entering the terminal at Tan Son Nhut, he eyed a telephone booth and his first thought was the slip of paper with the phone number and his second thought was, “what a mess this is going to be – a lieutenant making this phone call and trying to explain to the massive army on the other end who I am and why I am calling this number.” When someone answered, Lieutenant Guttau proceeded to explain who he was and why he was calling and the person responded, “Yes, Lieutenant Guttau, we’ve been waiting for your call.” My thought, “Oh, this isn’t good! They know who I am and why I called.” Their next response was “We have a flight for you tomorrow morning at 10 AM.” I asked, “Where am I going?” The response, “We can’t tell you.” Another sign this was serious business.

Here is an excerpt from a testimonial from Mick’s son, Joshua M. Guttau, recounting what happened after his father returned to Vietnam.

The next day he was reunited with ‘the guys’ in his unit, those special men that had only known each other for weeks or months but had a bond that would not allow any of them to ever leave each other behind. He soon learned he was being given the assignment of being the lead helicopter, out of over 600 helicopters used in the operation. His helicopter would be the first to go out over enemy territory to identify four LZs that would allow the other helicopters and ground troops to leapfrog themselves to Tchepone in less than 45 days and take out the objective.

This mission was NOT just another battle in Vietnam, it was ‘THE battle of and for’ the Vietnam War, and Captain Guttau’s unit was selected to lead the air attack into Tschepone, Laos (part of the Ho Chi Minh supply route), because of their past demonstration of success. Some called them the most fearless air unit in Vietnam as they were the B Troop, 7th Squadron, 1st Air Calvary. As one of our Tour Guides, an Army 101st Airborne Ranger, and I were walking back from a site visit to our bus, he commented to me in private ‘The missions your father flew as a Cobra pilot were absolutely crazy, those guys were our heroes, they kept us alive!’

Lam Son 719 was the last major military operation in the Vietnam War, and during the two-month invasion into Laos, on a color plot map it is shown that there was a more concentrated loss of aircraft and crews killed in this 60-day window as compared to the rest of the entire Vietnam War (15 years). Of all the helicopter crew losses over the 15-year war, 10 percent of those occurred in Lam Son 719. The color plot map appropriately shows each incident as a red spot over the map of Vietnam, as the color and density of dots appears as blood on the page, appropriately reflecting the meat grinder that Lam Son 719 would become, while becoming the largest US Military operation since D-Day of WWII.”

In a letter home to his wife Judy, Mick wrote “I want to be with you so badly, but I know that time will come soon, I’m very confident it will. For some reason I have the feeling God has something else planned for me than death over here. Maybe I’m confident or egotistical I don’t know. We’ll see what He has planned for our lives."

Mick did survive, while many of his friends did not. When he arrived back in the US, he worked at Treynor State Bank for six years. He felt fortunate to come back home alive and his intention was to make the most of this gift. With young children now in their life and the opportunity to farm not becoming a reality, Mick and Judy were given the rare opportunity to buy the bank.

With the help of Mick's extended family, they used the Guttau family farm, which by then had been the family for well over 100 years, as collateral to buy the bank and turn it into the community prosperity engine it is today. They realized this was a chance to help area farmers, businesses and families in the community they loved. Mick's hometown, Treynor, welcomed him home from Vietnam with loving arms, a rarity of the times, but a gesture that would have lasting effects on how they would view their community and operate their future business.

Working as a couple at the same bank has, as they say, allowed them to work with the most important person in their lives. They have a great understanding of what each other is going through when facing challenges and opportunities.

The couple never expected to return to Hawaii, yet, they found themselves in the same unique corner room overlooking the ocean, beach, and the yacht basin, and the same hotel years later and yet again in 2018. Each time Mick calls ahead to the hotel to see if he can arrange to have the same hotel room as back in 1971 to surprise his wife.

Mick believes that the ABA Community Banking Conference is the best educational opportunity for those involved in the banking industry and also served as the Chairman of the Council in 1991-1992. This year the couple ran into many people they have known throughout the span of their careers at the opening event. Several of which are other father, son banking teams.

“As we were leaving the hotel room to go home, I found myself pausing in the doorway and looking at Judy, thinking about what I had put her through. I thought about all of the years that have passed and all of the experiences that we have had together since that R&R trip in 1971. We were both in tears.” Said Mick. “I believe that I think back on my life more than most. It was a very thought-provoking trip and brought back a lot of memories. I especially thought about the guys and appreciated the moment, as I am not sure this experience will happen again.”

The Vietnam War and Lam Son 719, has a profound impact on who TS Banking Group is today and how the company strives to lead. Certain quotes from these military experiences echo in the buildings halls, “The troops come first” and ”Turn into the fire”.

For more information on TS Bank or Mick and Judy Guttau, visit tsbank.com. Read the full Lam Son 719 story here or visit the monument in honor of those who served and those who gave their life during Operation Lam Son 719 at the TS Bank branch in Council Bluffs, 43 Scott St.