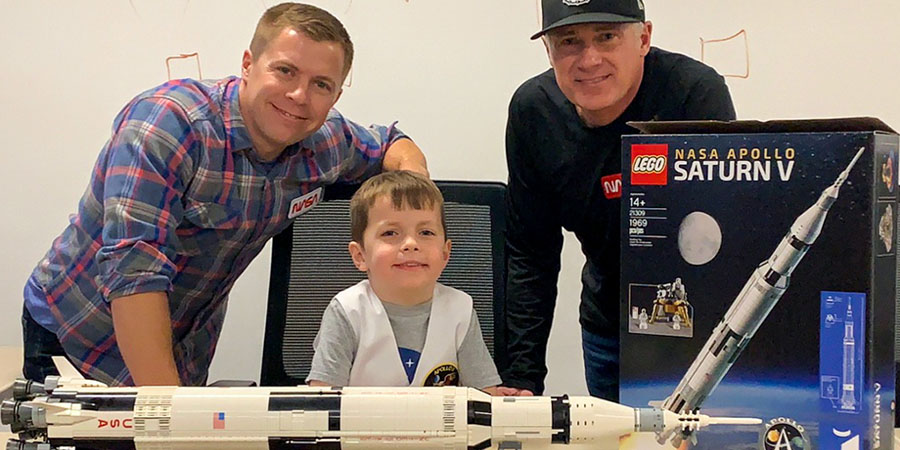 On today’s blog, we are taking a moment to celebrate Father’s Day. Here is an experience of TS Banking Group employee and father of four children, Kevin Forristall, sharing highlights of fatherhood interwoven with recent United States space exploration accomplishments.

One of the most remarkable and captivating events in U.S. history was in 1969 with the successful Apollo 11 mission. Three astronauts boarded a Saturn V rocket, landed successfully on the moon and safely returned to Earth. This year, I enjoyed several memorable fatherhood experiences centered on the space program and the Apollo 11 mission in particular.

In January, a colleague of mine, Gary Davis, invited my son and me to assemble a Saturn V rocket LEGO® kit. Upon making the invite, Gary was unaware within a month, Luke and I were scheduled to see the real Saturn V at the Kennedy Space Center. It was a treat for my LEGO®-loving son to enjoy the three-hour team building of the Saturn V while anticipating seeing the rocket in person.

A month later, as Luke and I walked amidst the landscape of launch pads and rockets, I was transported back thirty years in the past; to when my dad took me on the same journey to the same place, the Kennedy Space Center. Recalling my childhood experience of observing the enormity of the launch pads with my dad, while introducing my son to the same experience was a “landing on the moon” fatherhood experience for me.

As I was walking in my father’s footsteps and immersing my son in the incredible history of the Apollo 11 program, the next generation of the space program was bursting onto the scene with Boeing and SpaceX’s newest technological breakthroughs, launch pads and their partnership with NASA to bring crewed launches back to American soil.

We were able to add another chapter to our father-son story in May as Luke and I watched the futuristic SpaceX spacecraft launch the first manned crew from U.S. soil in nine years and the first ever launch of space station crew from a commercial spacecraft. After watching the SpaceX rocket launch from the same launch pad as the Apollo 11 Saturn V rocket, I reflected on one generation passing the torch to another and the multi-generational experiences I had walking the grounds near the launch pad at the Kennedy Space Center.

My experience caused me to consider two important and yet enjoyable aspects of fatherhood: introducing the next generation to the “moon landings” of our forefathers; also, inspiring and encouraging them to pioneer a better way forward and to make their mark on history.

TS Banking Group would like to wish all fathers an out of this world Father’s Day.

As Executive Vice President for TS Banking Group, Kevin is the executive leader supporting business units’ growth and strategic progress. Kevin has served in a number of different capacities since joining as the company’s first credit analyst in 2008 and joining the senior leadership team in 2010.  Kevin holds the distinguished CFA designation along with an MBA from Creighton University and a BA in Business Administration from Morningside College.